The Effects of Water & Sodium Manipulation in Bodybuilding 2.0 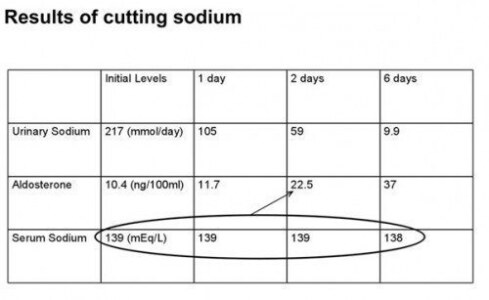 WATER and SODIUM manipulation during Peak Week of your Contest Prep…why this common bro science protocol is a bad idea!

It’s Peak Week, and I think that we all can agree that we all have a common goal here. We need to load as much water into the muscle cells, keeping you fully hydrated, while limiting the water underneath the skin (subcutaneous layer). That’s all fine and dandy, but lets separate fact from fiction. Rather, “Science” from “Bro Science”.

As I discussed last week, the Bro Science protocol of water and sodium manipulation during Peak Week can wreck havoc on your physique and should be avoided at all cost. It’s one of the most common reasons why so many physique competitors (Bikini to Bodybuilding) do not look their best on stage.

Do you even Science, bruh?

Science tells us that we already hold 70% of water in our muscle cells and only 30% else where. I like that ratio. And if the competitor is lean enough and in proper show condition, he/she should too. Screwing with water and sodium would be the last thing one would want to do. Yet, “Bro” coaches will have you trying to manipulate this ratio during Peak Week (uh, out smart the body) by doing all kinds of weird stuff like cutting sodium, water (really screwing with your electrolytes here…but that’s another topic) and many times, taking diuretics in an attempt to “trick” the body into changing the 70/30 ratio that is already in your favor.

Here’s the problem. It’s called “Homeostasis”, which is the body’s “Tendency toward a relatively stable equilibrium between interdependent elements, especially as maintained by physiological processes.”

Did you catch that part? “tendency toward a relatively stable equilibrium…” meaning, the body will fight to maintain equilibrium. In this case, try and manipulate the 70/30 ratio…you will lose.  Instead, when you cut water (keep in mind, the body will keep that 70% equilibrium…i.e., homeostasis), you’re cutting a lot of water out of the muscle cells too, the opposite of the goal of Peak Week.

“…If you’re dealing with a chemical system under equilibrium, any change to that system will then be met with a shift in the overall system to counteract the change and maintain equilibrium.”

Let’s put it in laymen terms. When you reduce your water, the body will still keep its equilibrium (70/30) so when you reduce the amount of water under the skin, your reducing MORE water from the muscles because the muscles hold more water in the first place. So now, your are left flat and stringy, not hard and full.

Unfortunately, there are still a lot of “bro science” folks out there that believe too much water can cause spill over and blur your definition which is why some folks still manipulate/cut water. Many of these folks believe since glycogen is about 2/3’s water, that water is the culprit…but it’s not. The problem with this is too many carbs. Water doesn’t control the amount of glycogen your body converts from carbohydrates (through a process called gluconeogenisis), the carbohydrates do. If carbohydrates are on point, you can consume as much water as you want. The remaining water you consume that is not used for glycogen, and the rest of the body’s needs, will simply be urinated out.

If you consume too many carbs your body will create more glycogen than your muscles can handle and the excess glycogen will “spill over” into the subcutenous skin…leaving you blured and/or soft. Again, it’s not the water that does this, its the water aith too many carbohydrates in the form of glycogen that does.

However, if water is in full capacity and you are a little short on glycogen to fill you out, extra sodium about 2 hours out from the stage should be enough to fill you back out keeping you hard and full without risk of spillover. This is where another mistake is made where folks will load the carbs up on showday, thinking it will increase glycgoen. However, carbs take about 24-36 hours to fully assimilate and make its way to the muscles, so this isn’t going to do the trick. You might get a little more vascular, but the risk of spill over increases too.

But, if carbs and/or sodium are short, even if water is high, you may still look a little flat. But better to be flat than spilling over.

Now, since I brought up sodium, lets discuss that in a little more detail.

In short, sodium, just like water, is tightly regulated by the body too. When you cut your sodium and water, the body is going to fight to keep what it has been used to…at least for a few days. If your consumption of sodium decreases, the body will increase a hormone called “Aldosterone” (the water retention hormone) which activates SODIUM ABSORPTION and POTASSIUM REMOVAL. So when you sodium and/or water deplete before a show, you will INCREASE a hormone thats purpose is to REABSORBE water from the nephrons in your kidneys, and that will flow into your interstital space.

Aldosterone, the enemy within

Because you depleted your sodium/water, and caused a rise in Aldosterone, you’ve now lowered your blood pressure which will prevent you from getting a good “pump” and can lead to dizziness and passing out. In addition, lower blood pressure means the kidneys will not have enough pressure to provide adequate water circulation through the body, so the water will leak into the subcutaneous layer. This effect is another reason why so many wrongfully believe that water is the spill over problem, when it is actually due to your kidneys not fuctioning properly due to sodium/water manipulation. And if you think that raising potassium consumption will help…you’re right. It will help raise Aldosterone EVEN MORE…thus more subcutaneous water (under the skin).

To make matters worse, some people will add a diuretic on top of sodium and water manipulation. The problem with this is, diuretics are typically given to people who are experiecning high blood pressure. The purpose is to have the kidneys pull water and sodium out of the body and bring high blood pressure down by reducing blood volume (which is comprised of a lot of water). So now you have added another step to lowering your blood pressure, which can have a negative effect on the physique when we need our blood volume high in order to get a good put and get vascular.

In addition, this is really messing up your electrolytes which is very dangerous. And from a cosmetic standpoint, can make lose skin even worse. While on the flip side, keeping your electrolytes up and in balance can have a positive effect on lose skin.

So if you have even been told you weren’t lean enough, or need more conditioning, and you looked better before peak week…this is why, especially in the legs.

Congratulations…you now just totally ruined your physique that was on point a week ago, and turned it into a flat and soft mess on show day when all should have done is the exact same thing you were doing when you looked good…keeping your water and sodium levels the same the entire way through.

(Note: This is not in reference to a sodium load prior to hitting the stage. That’s a different subject.) 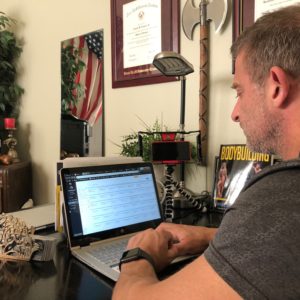 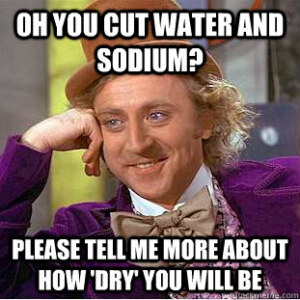